Yachting Youth and Google Can Be Wrong

It’s summertime, so warm and beautiful, shorts and T-shirt weather. Margaret and I recently returned from attending the ACBS St. Michaels Wooden Boat Show. It is always good to get up there. We went up a few days early to see and stay with the Canteras. Dave’s kids are the best. I found a magazine, “Prop Talk,” and when I talked to Frank Cantera, Dave’s son, I said “You should be doing this.” The kid looked at me strangely and replied “That’s me.” After a few tries, it finally sunk in. The boy in the magazine was, in fact, Frank! Dave and Lena have taken great pride in raising their kids Benjamin, Annaliesse and Frank and it shows! Between all the things (sports and extracurriculars), these kids have also built and used boats on the water.

Chuck Cantera is an old friend and a good man. Chuck has owned the Trumpy “Manatee” Contract 341, Built in 1950 for Col. E. R. Fuller, for a long time. Col. Fuller passed away during her construction and she was finished out as “Aurora III” as a show boat for the yard. That is one of the reasons she is so special! Chuck, now in his 90’s, is having a new bottom installed at Hartge Yacht Harbor in Galesville, MD. To some this doesn’t make sense. But to me, it does. The old man loves his boat. It is one of the coolest little houseboats ever built. He bought her in Florida, but through thick and thin, he enjoys having or being onboard his little yacht. “Manatee” is very much a family affair. I tip my hat to you Chuck! 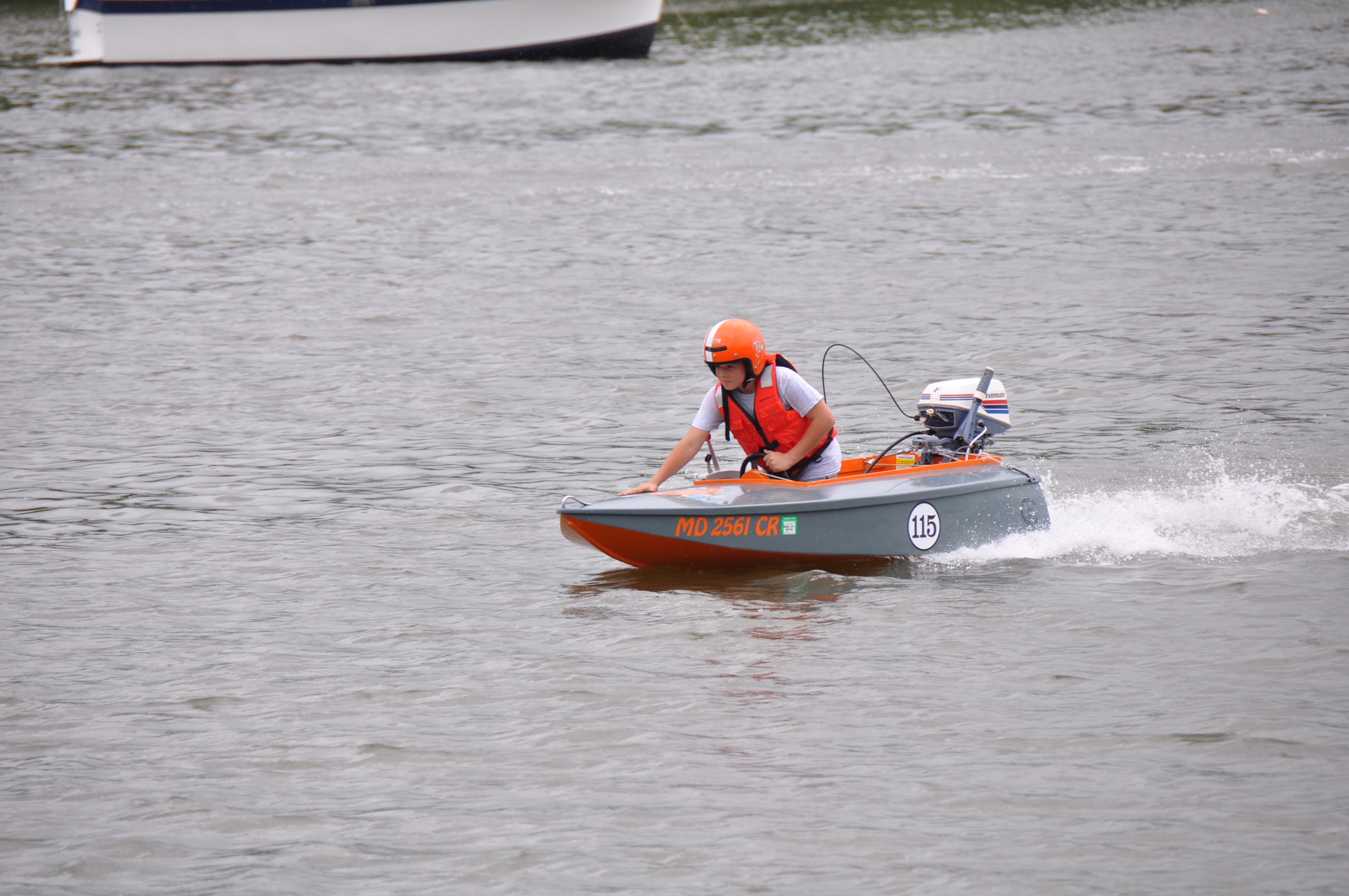 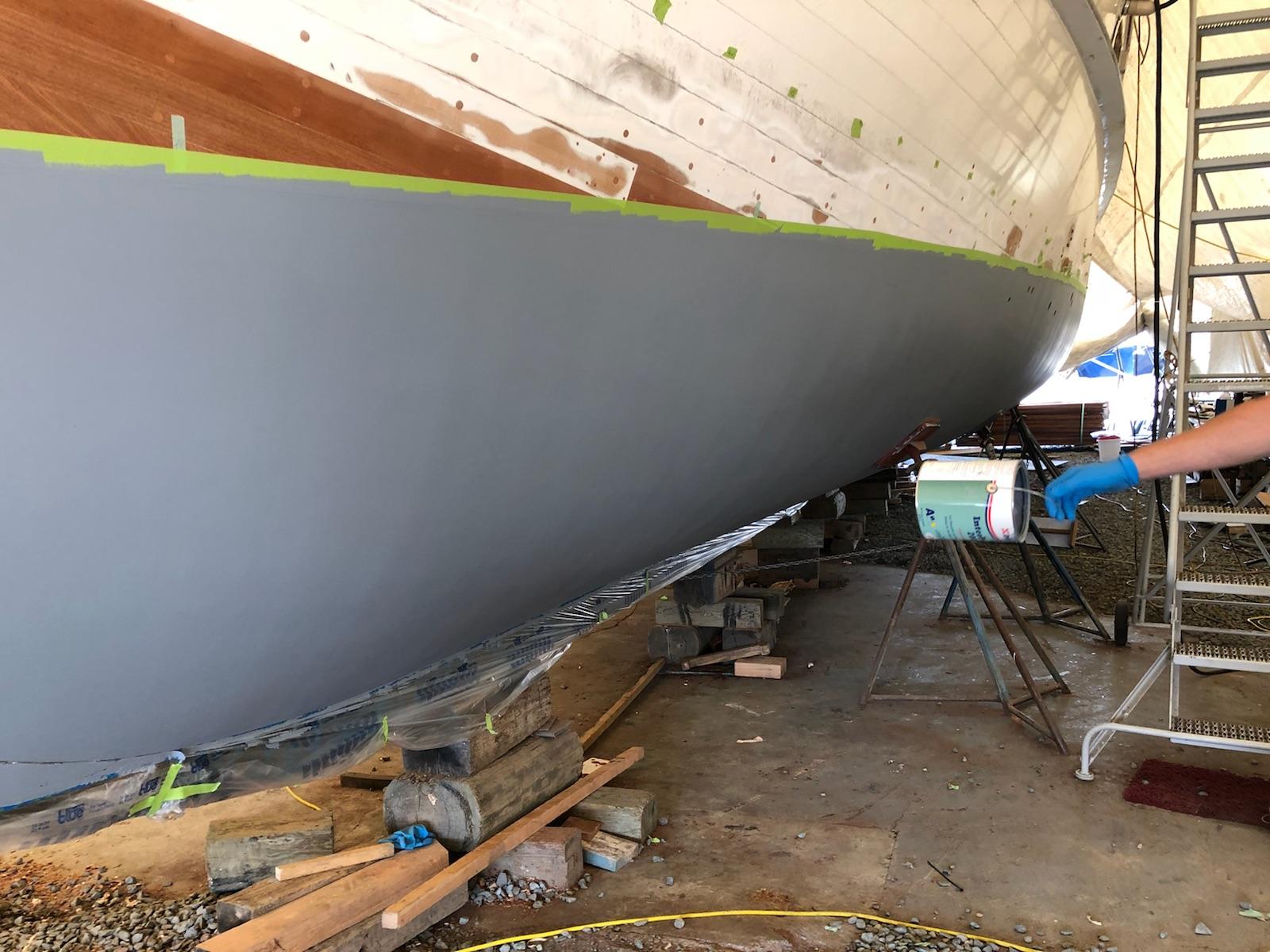 The St. Michaels Wooden boat show was a little lighter this year. This is a problem for lots of these shows, as the older generation pass on, there are less of us coming out.

I think it’s time to mix it up for the ACBS, get young families involved. How? I asked Dave and his son, they are the perfect age, and they both said almost the same thing: There is not much to do for kids and families. Here’s a kid who built his own skimmer hydroplane, which he told me does 20/mph with a 6/hp outboard, saying there isn’t much to do at these shows. The Sunnyland chapter has started a program, the SCAMPY Program. Why not try something like that on a national level. Kids from one area could pop their boat on the roof of the family car and travel to other ACBS shows and run around. What about father-son cardboard regattas? And vintage cars? What about finding someone to make kits for simple boats that families can build in their garage? It is time to think young! It is time to bring the next generation into the fold. We need the Dave Canteras of this world and his kids too!

David, Margaret and I went in search of Lost Trumpys, Elcos, and Consolidateds, all in a small area.

“Speed Along” is a 1926 Consolidated Commuter owned by a man from New York. Years back Mr. Baker’s Trumpy, “Stately Lady,” was docked at a covered slip in Oxford, MD. That seems so long ago. Her bilge pump cycled every few minutes. At that rate, I figured she would find a resting place on the bottom.

So, when I asked Dave whatever happened to her, he led me through the back side of this old boatyard. There, under covers, was the famous “Speed Along,” still beautiful but she has been waiting 10+ years. The rest of her story I do not know. Hopefully one day she will be brought back to life. There are so few of the original left.

Then there is “Pathfinder” a 1962 62’ Elco Flat Top Cruiser originally built for E. DuPont as Alberta II. This boat is a legend on the water. Her previous owner, Doctor William Wright kept her running and docked in a covered slip. At first glance, she looks pretty rough. But as the Doctor had painted some kind of rubber paint on her, all her decks and varnish work have been sealed. What looks rough has preserved this old girl. Her engine ticks like a clock.

The interior is original and there is a lot to work with. Dave and friends have been taking care of her. They are looking for someone to take her. “Pathfinder” needs a new owner. The yacht could be purchased for a very reasonable price. Dave’s email is dave@canteraassociates.com.

Trumpys- There is a Trumpy list called “Jerry’s List.” The late Jerry Foster kept a list of all the Trumpys. As they changed ownership, he would update it and if the yacht was no longer around, note that in the book. I was given the job by Shirley, the widow of Jerry Foster, to keep it updated with owners, past and present. Through the years, there have been a few holes in the list. So recently, I started going through and updating it.

I can use some help finding the information on the boats that don’t exist anymore and new owners that should be added to the list. For years I have had most of the Trumpy owners on my Dear Friends mailing list and would love to be able to update that as well.

After leaving the boat show in St. Michaels, we headed south to Deltaville, Va. to stop and see the “Sequoia” which has been on the rails at Chesapeake Boat Works, known historically as the “Old Deagle Yard” for quite a while. After a long day in the sun, followed by a long drive down I-13, my eyes kept blinking, and I was taking deep breaths to stay awake. As we pulled into this little podunk town, we passed a motel. I said we needed to stop for the night. So we started looking with no luck. One was converted to storage, the other to a lab for testing. Finally we began to wonder if we would be sleeping in the car!

We were at the other side of town, finally, stopping at what Google claimed was a bed and breakfast. As Margaret asked, the man said “We haven’t done that for three years! But there is a place across town. They do weddings there and I think they might rent rooms.” We stopped to get something for dinner. The restaurant closed at 6:00pm. I figured we were batting a zero. When we turned down this long driveway between the cornfields, I was thinking, hopefully, I can turn around with the boat, my little “Glamor Girl” in tow, and get back out to the main road. 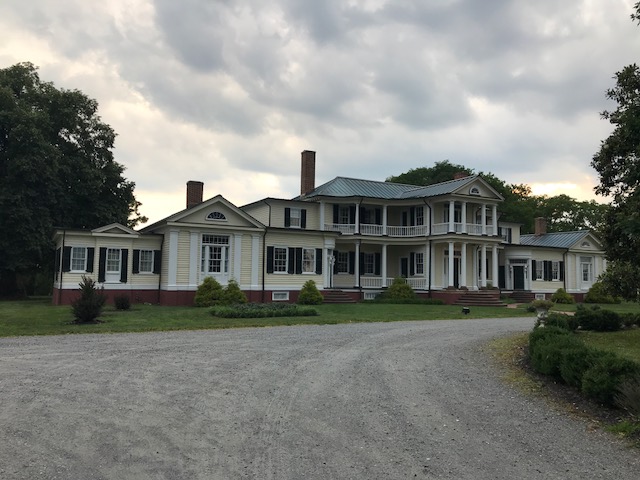 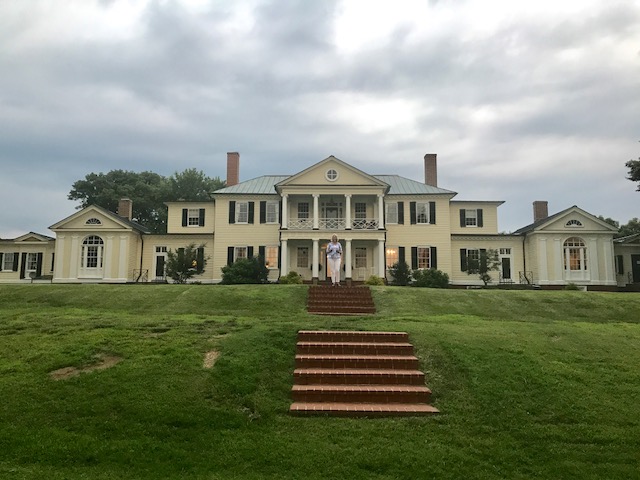 Soon the road opened up and in front of us was an amazingly beautiful mansion, the Belle Grove Plantation. This was the birthplace of James Madison, the Fourth President of the United States. Walking into the grand entrance, it was the golden hour, that part of the day just before sunset, and it was perfect. We sat on the back porch, sipping local wine and watching the water flow down the Rappahannock River! The manager looked at me and smiled. This was heaven. What a way to end the day.

At daybreak, we had breakfast in the main dining room. The lady of the house told us the history of King George, VA. John Wilkes Booth had come through and sought refuge here in town with Dr. Richard Stuart in 1859 but was turned away. Our host shared great stories. I felt glad that we had found this place and stopped. Driving out the grand driveway felt a little surrealistic, like a painting or a daydream, but it had been real. Down the road to Deltaville, there were places we could have stayed at after all, but nothing like Belle Grove.

Somehow I had built in my mind what the boatyard would look like, old timber-framed buildings with cedar shakes. But that’s not what it was. Steel, concrete and simple. Nothing wrong with it, but I thought it would be more like Huckins. Something with soul. 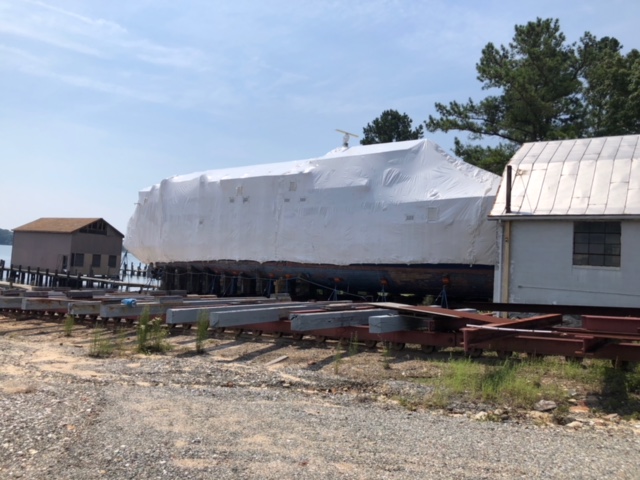 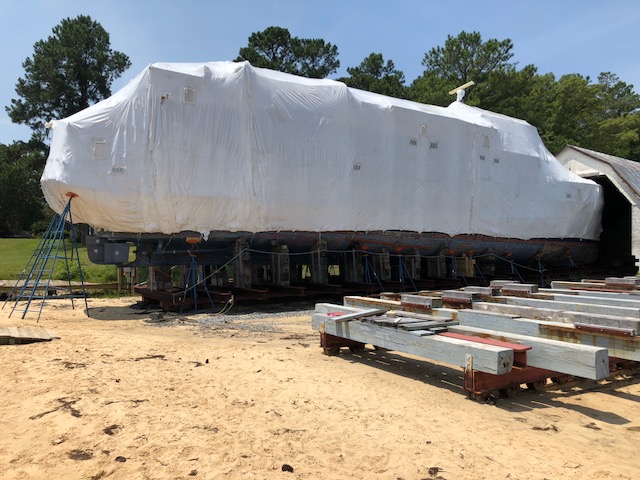 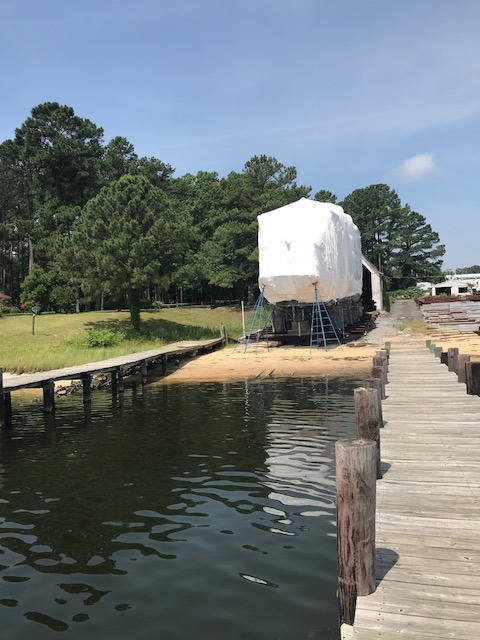 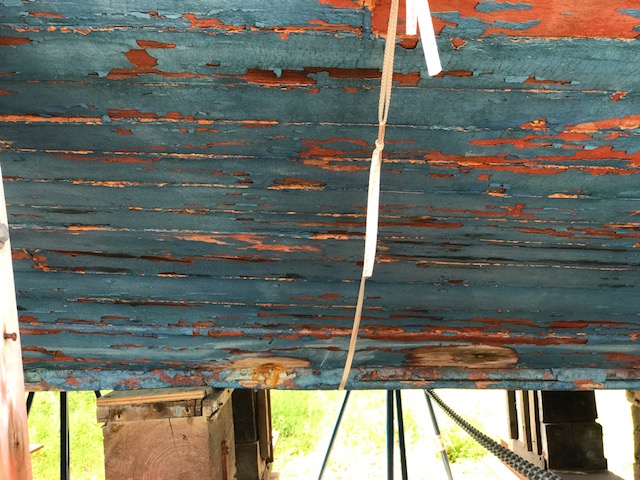 Time hasn’t treated “Sequoia” well. She was veiled in a white plastic, covering her from anyone’s gaze. The bottom shows the strain of her weight bearing downward. I have seen many a great yacht die this way. Let’s just hope this is not the way this story ends. Driving onward I had a lump in my throat - this is history slipping away. I really hope not.

On a lighter note I got an email from Cindy Purcell. Huckins Yacht has gone crazy (I think it is contagious). This is their 90th year and they are introducing their first production boat! A 38’ day cruiser. (See the photo of the drawing). I’ll tell you what I like about the boat. It’s a Huckins! It looks like one, it has the elements of design that go back to the 40s and 50s and in the same breath, they have softly modernized the style. Beautiful!

Lastly, on the home front, we are refining our launch M27, working on a head. I thought beauty, grace, speed and movability, that’s all you need, right? Well, now you need a head too.

Boo-Boo the 1960s 22’ Chris Craft is sporting her new bottom. I think her new bottom is bullet proof! Just haven’t tested it yet.

Riders of the storm

Spark, Shine and a Tow

Of all the boat shops I've owned before, and the tale of sailing the two "Arawaks"